Southwark is an Inner London borough, situated on the south bank of the Thames in Central London. Being entirely on the south side of the river, Southwark is connected through bridges to City of London itself, on the opposite northern side of the Thames. The borough contains a large number of popular tourist attractions, key public places of interest and historical sites. All areas within the borough are part of London Postal District.

Like much of London, the modern day borough of Southwark has its origins in ancient times, namely the Roman period in Britain. The name of the original Roman age settlement is not known, but the name Southwark first appeared in records sometime in the 9th century AD. Southwark Borough was founded in 1965 through a merger of three former districts – Metropolitan Boroughs of Camberwell, Bermondsey and Southwark itself (now areas within that borough). Geographically, Southwark Borough is surrounded by (in clockwise order) City of London and Tower Hamlets to the north, Lewisham to the east, Bromley and Croydon to the south, and Lambeth to the west.

Population and places of interest

At the moment, the Borough of Southwark is home to about quarter of a million people. One of the biggest ethnic minorities in the borough are Nigerians, mostly within the suburb of Peckham. There are also pronounced Jamaican, South African and some former French colonial communities living across the borough. About 35% of housing stock in the borough is owner occupied.

Places of interest in the borough are aplenty, ranging from historical monuments to theatres and galleries. Southwark is connected to City of London to the north via a number of bridges, which are also big tourist attractions and historic landmarks, not to mention key traffic arteries:

Other landmarks throughout the borough include Tate Modern Gallery and the rebuilt Shakespeare’s Globe Theatre. The tallest building in Europe – The Shard is also in Southwark, not too far off the riverfront. Other frequented places of public interest are the famous Imperial War Museum and Borough Market. The largest green open space available for public use in the borough is Burgess Park (one and something miles wide). If you are in the process of organising a house or business relocation to or from Southwark,  professional removal companies in Bermondsey SE1 and moving service specialists in Camberwell SE5 are known to offer cost effective, comprehensive solutions.

Other museums and galleries 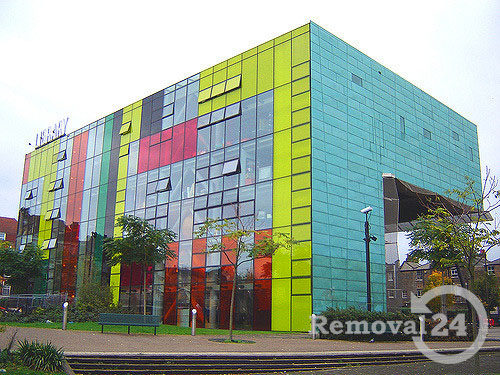 The Borough of Southwark is big on arts and culture, evident by the many internationally renowned museums and galleries. One of the best known attractions in London is HMS Belfast serving as outpost to the Imperial War Museum, the vessel is moored at Southwark’s riverfront. Besides Tate Modern (housed at the former Power Station in Bankside SE1), Southwark is also home to the oldest public gallery in Britain – the Dulwich Picture Gallery. The Bankside Gallery is another place of cultural interest in the borough. There are also a number of scheduled historic monuments in Southwark, one of them is the medieval Winchester Palace remains. The abundance of historic and modern architecture in Southwark is also represented by award winning structures like Peckham Library, designed by Will Alsop who won the Stirling Prize of Modern Architecture for the library’s design. Another piece of marvellous architectural design is the new library building (still under construction) near Canada Water. The MOCA London is a free museum dedicated to cutting edge, futuristic art.

Indeed, Southwark is where classical theatre performing all began. The very theatre which the great William Shakespeare founded is in Southwark, right near the riverfront – the building seen today is a reconstruction of the original. Remains of another old theatre venue – The Rose can also be seen to this day.  Southwark also has strong literary and connections. English writer Charles Dickens set a few of his novels in Southwark (the old borough) where he used to live as a young man. A number of well-known local pubs and inns have also appeared in works of literature and poetry, for instance The Tabard Inn, The George Inn, The White Hart Inn and others.